First post of the New Year and it is the first Zentangle® related post in months.  There has been a lot going on in my life. Won't go into the details.  Nothing major in terms of illness but just things that result in a good deal of stress and are time consuming.

When I saw the first challenge of the New Year, thought I could knock something out quickly. Well, it took longer and it probably got more complicated than it needed to be.  It did give me some much needed tangling time however.  There was no stipulation that had to use the standard Huggins, so as somewhat apropos, I chose to use "Crazy Huggins".  Here is what I came up with. I hope you enjoy it. 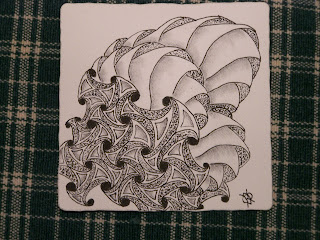 I had some difficulty deciding which orientation I wanted to use and decided that there was no reason I could not post both.  Interesting how it changes how you look at it when you just rotate the tile a little.  I also chose to put the square orientation as I could get a better close up of the tile.  Here is what it looks like with it oriented on the point. 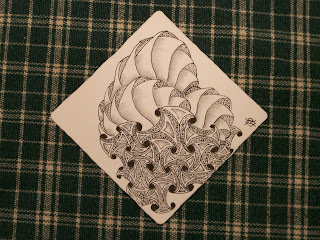 I have not had a chance to look at any other things that have been submitted. I am sure that there are some really fantastic pieces of art.  If you have not done so, would encourage you to go to I am the Diva and look at what others have posted.