A Challenge Piece that did not get completed in time

I have not posted or participated in any challenges for quite some time. I won't bore you with any of the details/reasons for this. There were a couple of recent Diva Challenges that I wanted to participate in. One I did not even start. The other I just did not complete during the week of the challenge. Since I had not posted anything for a while, figured I would at least put it here since I finally got it done.

I combined the two challenges to come up with this piece. The first one that I wanted to do was the Tripoli challenge. I enjoy this tangle even though it does present certain issues. The second came from a FB post regarding the difference in how we may tangle depending on whether it is for a class or just for our own enjoyment. There were a number of folks who indicated they thought there were significant differences. I do not know if I would say that there are significant differences, but there are some. When doing for my own enjoyment/relaxation I tend to use tangles that use simple repetitive strokes and I do not have to refer multiple times to a step out. I also tend to fill most of the tile. I do not think about if it is cluttered. I also tend to try some new or different things when I am doing a tile just for me.

Enough information, here is what I came up with. I hope you enjoy it. 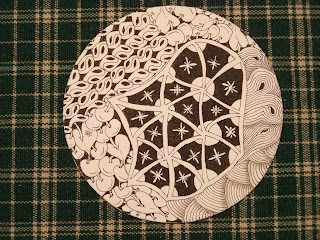 Getting some things ready for the holidays and events: Zentangle Inspired Art using different mediums

Seems like forever since I did a blog post. I do not even want to think about how long it has been since I participated in a Diva Challenge. I do look at what they are and occasionally will look at a few but have been busy with a number of other things. Some of the things I have been doing have been preparing for classes and some are to have some new things at some events that I participated in. I have not even started doing anything for the holidays, other than what I have done for a class.  Here is a little bit of what I have been up to. 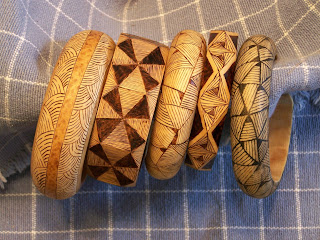 Here are some wooden cuffs that I used a wood burning tool to put the patterns on them. The one on the far right is drawn with a pen. 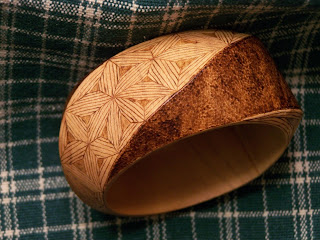 This is the only full bracelet that I have worked on. Took a while to do this one as it is about 2" wide. 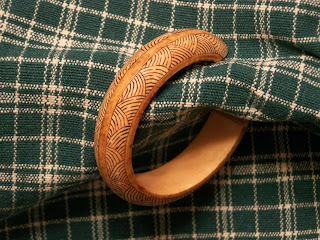 This one I used one of my favorite, go-to tangles, Shattuck.  Also tried a lighter shading. Pleased with the way that this turned out.

On all these I used a combination bees wax that I found at Menard's. It does not give a high gloss but it does help preserve the wood and would be easier for most people to use if they wanted to buff later or it dries out a little. Everything that I have tried darkens the wood a little. This is not too bad so does not change the original work that much.

Here are some pictures of things that I have been preparing for classes. They are made from paper and make unique ornaments. One is a combination origami and ZIA project. It is called Jump. Here is the link to a video that shows how to do them. They are labor intensive.   https://www.youtube.com/watch?v=7v0Eou-Ive8&app=desktop 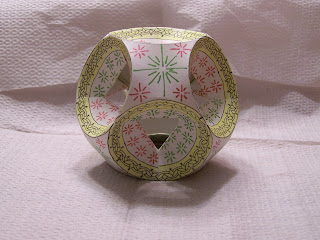 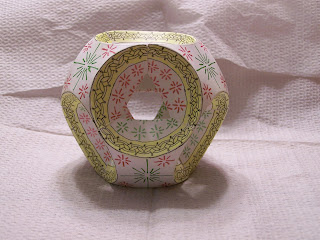 The other is done by CZT Dorian Eng. Here is the link for her video.  https://www.youtube.com/watch?v=81_W8wx2DGI&feature=youtu.be 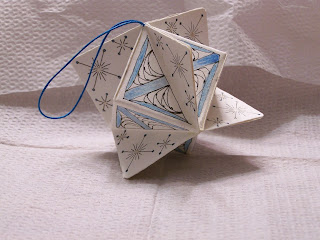 The video shows how to make this using the original Zentangle® square tiles. When I posted this on a FB page she made a comment about trying it on Zendala® tiles. She did not give any suggestions but decided I would follow the same procedure. Have to admit that making the folds were a little more difficult. Not so much quartering the tile, but the folding in the edges was trickier. Fortunately, did not have to be exacting to complete. I also tried something a little different as I used two different colored tiles.  Here is what I came up with. Will make a few more comments after the pictures. 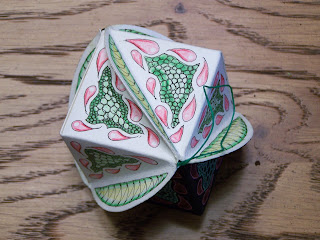 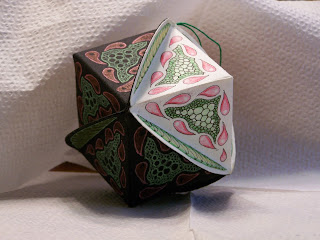 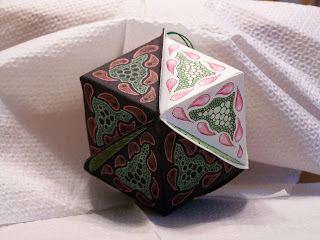 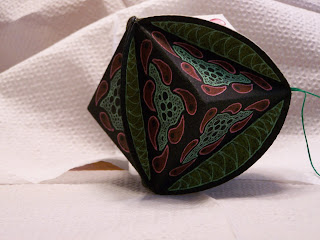 The white tiles were done using microns to draw the tangles. The color was done with colored pencils. To achieve some of the effects, I did a couple of layers with some until I had the intensity of color that I wanted. On the black tiles, the tangles were done with Sakura Moonlight gel pens. I also used Staedler colored pencils to add some of the fill. This did no show up as well in the pictures. These are definitely easier to make, but can get labor intensive depending on what tangles you use and if you decide to use color.

If you got this far, thanks for staying with me through this longer than usual post.

Go Tangle
Posted by Tangles and More at 7:13 PM No comments: