A couple of new things have been working on: Coloring pages and large tile

Have continued to be busy trying to get things together for the market that I am participating in. This next Saturday is the last day. When that is done, I can rest for a little but then I need to do things to get ready for Christmas and I have another baby afghan to get done.

Not like I did not have enough to do but decided to see what would happen if I had coloring pages available. I have not done any before and have not looked at a lot of them. They are popular. Even our local library has some contest going on and the paper had an article about a group that meets weekly.  I wanted to do something that was a little unorthodox. Not totally unusual for me. Came up with two of them and one that I would consider to be more traditional. Cannot say that they were a run away hit at the market but did get people to stop so I could talk with them about classes.  Here is what I came up with. 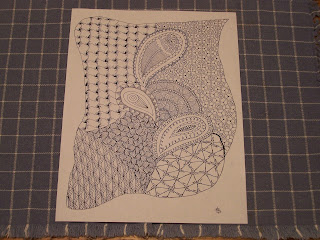 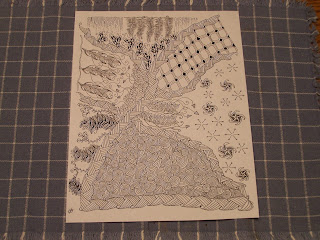 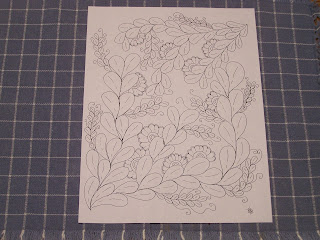 That last page was the easiest to do. Not sure if I will do more or not.

I have worked on tiles before, but the largest I did was a 6" square. This one is just a little shy of double that. I think it is about 11.75". Used Microperm and IdentiPen on this. Took a while to complete because of the size. I am planning to cut cork to glue to the bottom so can be used as a trivet or it can be a part of a center piece. Not sure what I will do to seal it. I have some sprays but I also have some water based polyurethane that I have not tried before. If goes well I have about 5 more this size that I can do.  Here is the tile without the cork on the underside. 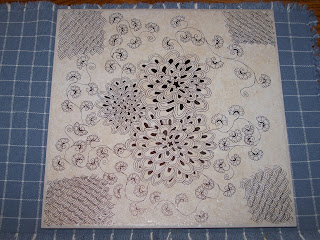 Wanted to keep the design fairly simple so I used tangles where there would be a larger amount of negative space. Only used 3 different tangles. Keeko, in the corners is from Zentangle®. Mumsy is by Sandy Steen Bartholomew.  I again used Henna Drum, by Jane MacKugler.  Not sure that I would want to do something with grid based tangles. If I really feel daring, may try one using Tripoli or Quandary.  I like both of those tangles but have never tried them on anything this large.

I have been busy and just not goofing off: New stone coasters with Zenith and Organic as frames/borders

I  have not posted much of anything lately or even participated in any of the challenges that I so much enjoy. I have been in what I refer to "production mode".  Doing a lot of ZIAs but not much relaxation in the process. Do not take the time to take pictures of everything. If I remember, will try to take a picture this Saturday. Most days I am just focused on staying warm. The overage temperature at the start of the event has been in the low 30's. One day we had about 5" of snow. We are inside, but the building is being remodeled so is no heat. Some have propane heaters but I am not one of the lucky ones and not going to spend the extra money to get one. Place is not wired to handle electric heaters. Oh well only have two weeks left.

Wanted to post some things that I just finished today. Have done these before but not for a while. They are 4" stone coasters. Have not put a sealer on them yet and will probably also fire them for a short time in a small craft oven that I have. Think this process burns off the dust and reduces clouding from the sealer. Here is a picture of the four that I did today. 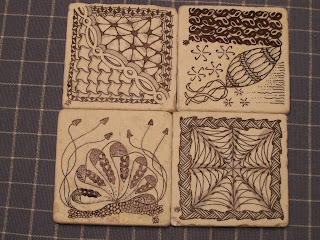 Here is a picture of all four that I got done today. I forgot how much fun these are to do. They are about the size of tile so it is almost like doing one of those. Used a Identi-Pen for the tangles and then a gray Fabrico dual tip marker for the shading. Will probably use a light coat of a spray acrylic sealer. 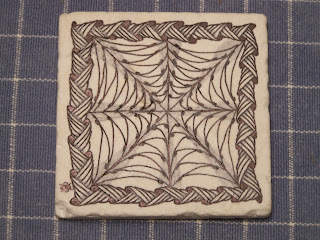 Did a single picture of this one as I was able to use a  newer tangle, Organic by Sayantika Ray. When I first saw it, thought that it would make a nice frame but as with a lot of tangles, the corners can be the tough part. Was able to work out a way to do this one that I was pleased with.

I keep saying that I hope that I will be able to get to some of the challenges. I have started a few, but have not finished them in time to post them. When, and if I finally get a chance to complete one, maybe will post the ones that I finished after the deadline.