This challenge was really pretty easy when I saw what it was about. Most of what I have been doing is without strings. Rather than take the time to do a new tile, decided to pick things that I had all ready done. Issue was picking which ones to use. Finally decided on these two, mostly because they are different.

The first one looks like it could have been done with a string but it was not. I started with Sankegg and then developed the others as I went along. Was thinking of using tangles to separate the different tangles. 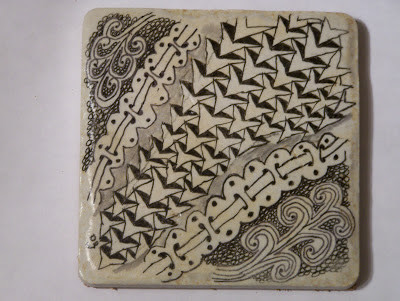 The second was one that I started with Purk and then just had the tangles morph into the next tangle. 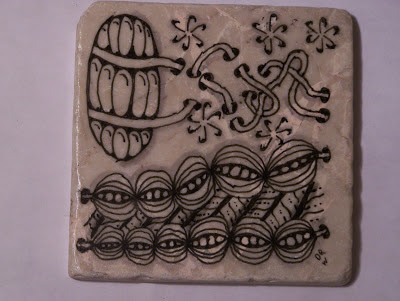 If you have not all ready, go to The Diva's blog and look at all the submissions that have been done. As always there are many fine examples of tangles and ZIAs. Have a good week.

Comments are always encouraged, welcomed, and appreciated.
Posted by Tangles and More at 7:28 PM 21 comments:

Was able to get something for the Challenge quicker than I thought. Can take care of two things with one item. While working on another set of coasters decided to do one with a more organic theme. What  better time to use Zinger. Adds a nice touch to different tangles. 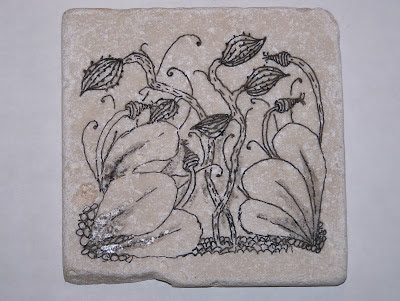 Tangles used: Zinger, Silkpod, and Flux. Silkpod is a tangle from fellow CZT 10 graduate, Dianne. Was from our childhood seeing milkweed plants in Ohio farm country. To see a step out for this tangle click here to go to Dianne's blog. If you have not already been there, go to the Diva's blog by clicking on the word "Challenge" above to see other submissions for this challenge.

For all those in the US hope you have a great Thanksgiving.
Posted by Tangles and More at 2:55 PM 13 comments:

New Tangle, an Embellishment, or Just a Pattern - Rugz

Taking a break from getting things ready for the Art/Gift Show. I may pay for it later but need a break. First want to say how surprised and humbled by the number of views that the step outs for Fearcles and Exed got.        Some of this is due to it being listed on Genivieve Crabe's Weekly Zentangle Round-up(thanks Sis). I also posted it on Flickr in the Freehand Doodles Group. Not sure how many duplicates there might have been but got over 400 views on them. Was surprised. Wish a few more had left comments though. Hope to see it showing up in some other peoples's work. This is about a new one which I am not really sure what to call it. It came about at the training. Took a lot of pictures of patterns that I saw while out for a walk, this one was right under my nose as it was in the hallway carpeting of the hotel. Here is what that looked like. 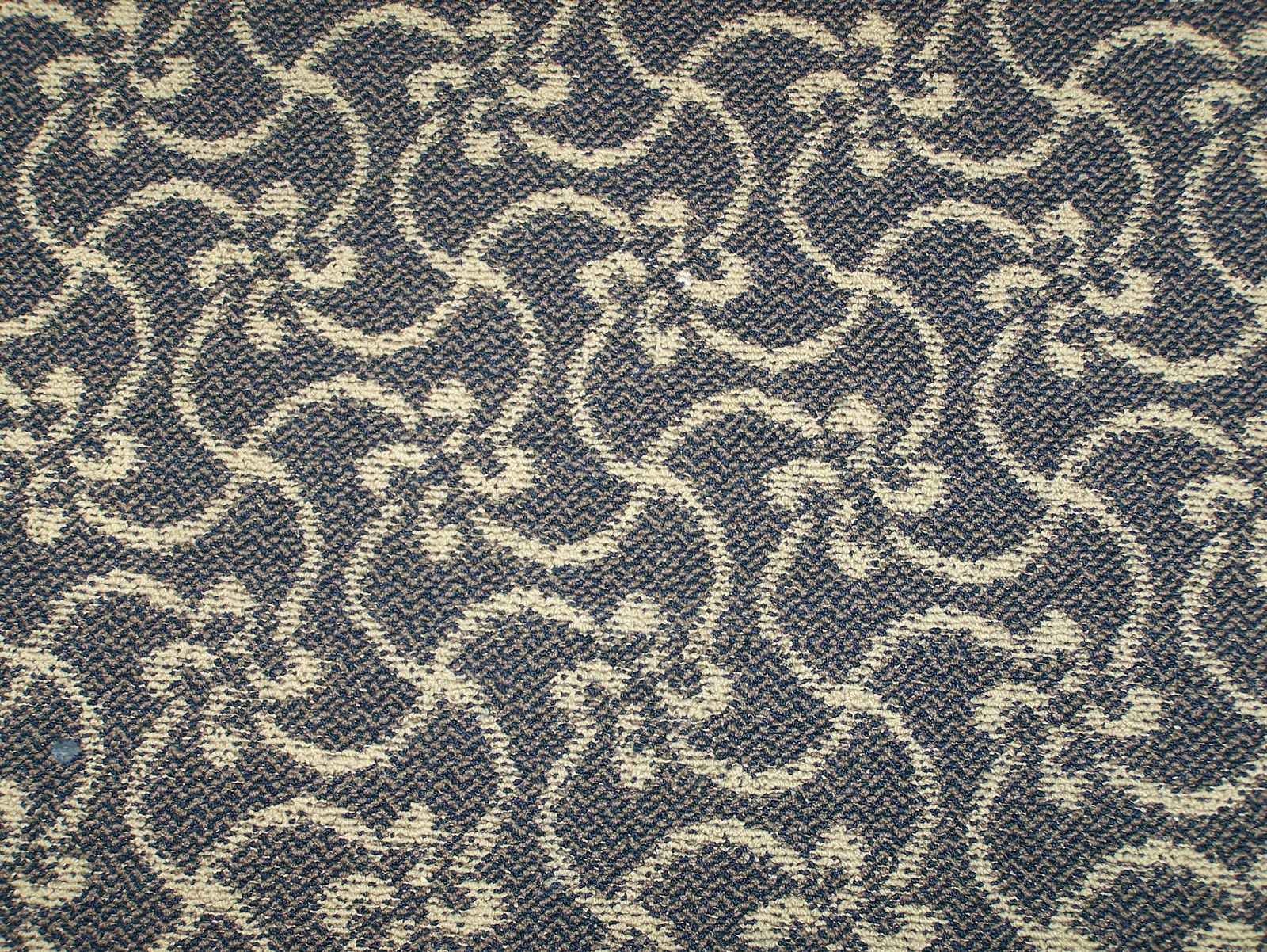 Here is the step-out I created on the pattern. 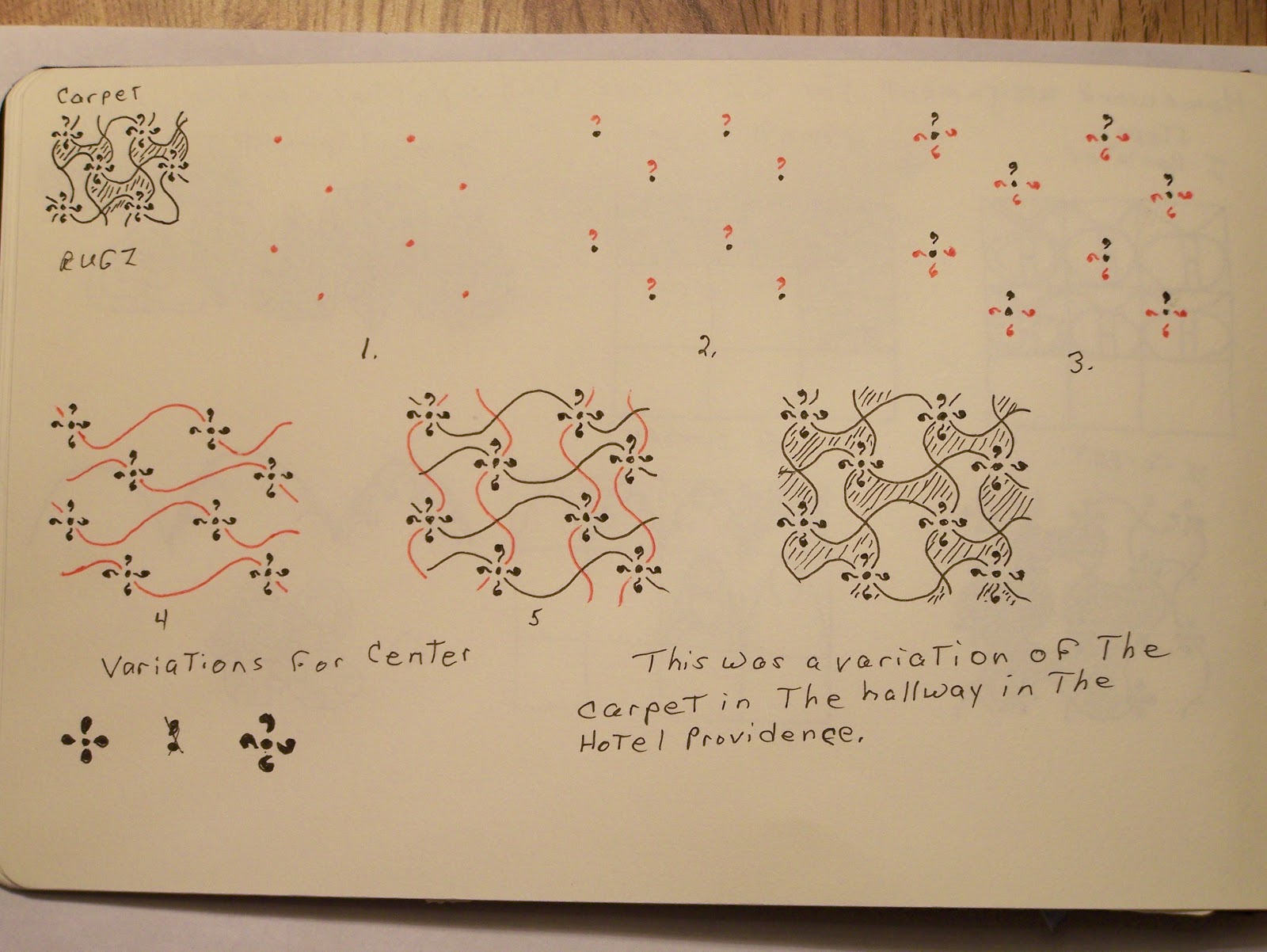 Here is an example of using it on one of the coasters that I am making for the Art/Gift Show. 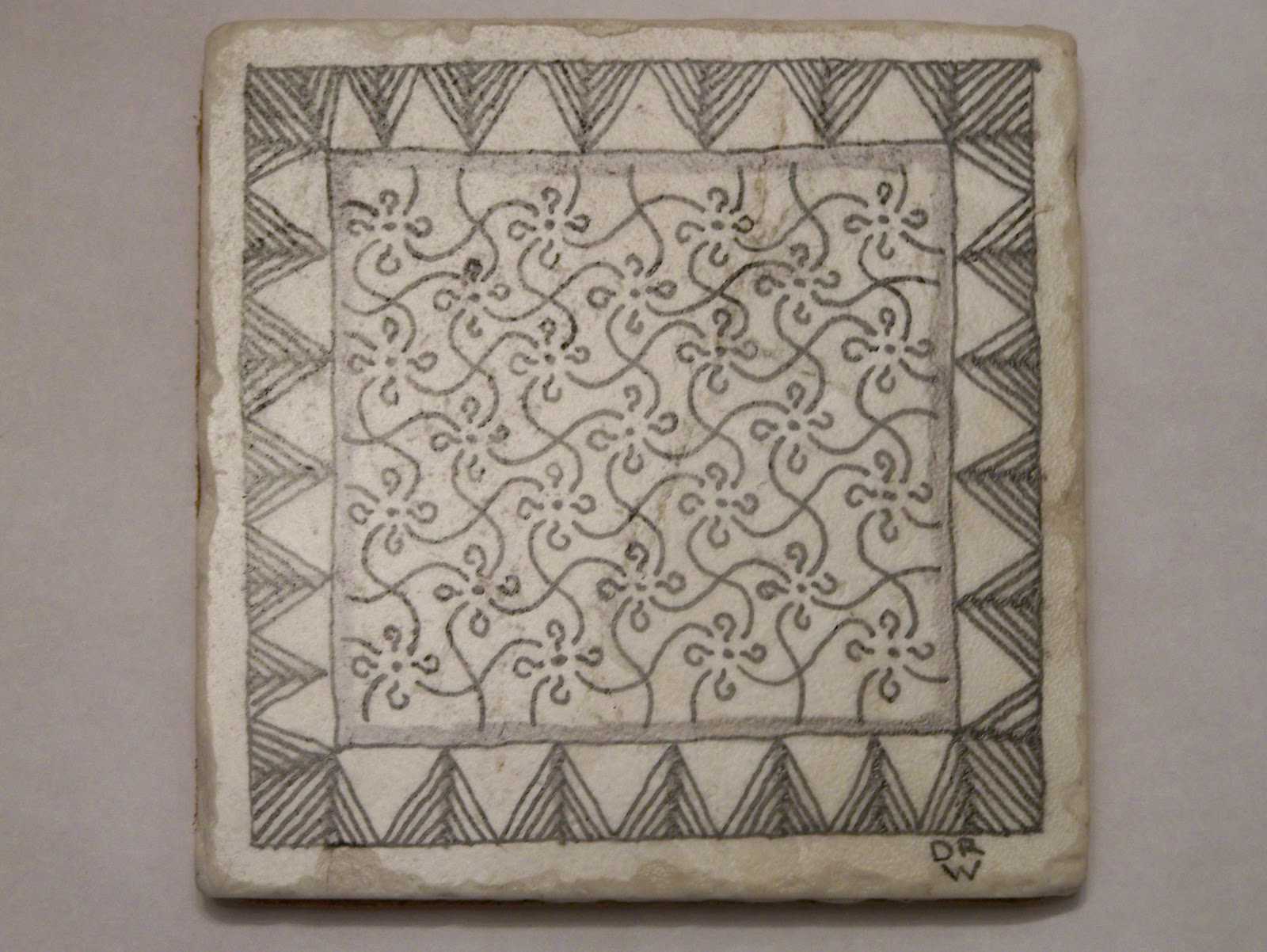 Was really a nice fill pattern for this. The border around it is a variation of Hybrid. The tile is a 4x4" Field tile from Menard's. Was another CZT 10 that I shared part of the flight home with, who drew my attention to the similarity of this to another tangle. Also not sure that all patterns are tangles.

Would be interested in hearing from others as to what they think.

Have to get back to work on the things for the Art/Gift Show. Will try to post some pictures of some of the things I have done, or may just wait until I set the display up and take a picture of that. Hope to get back to the Zendala Dare and Diva Challenge soon.
Posted by Tangles and More at 6:35 PM 4 comments:

Was not sure if I would be able to do any of the challenges/dares this week because of getting things ready for the craft/art show. Used this one as a break from doing all the Christmas things but was able to incorporate a little of both. I had seen Socc before but had never used it in any tangles. It was a little labor intensive because of the large space that I used but still fun to do. Getting this posted now because I will need to get back to doing ZIAs and other things for the show. Here is my tangle using Socc. Hope you enjoy it. 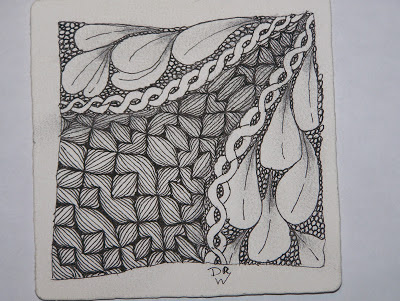 Tangles used: Socc, Flux, & Tipple. Not sure if the woven string is an official tangle or what its name is. If anyone knows please let me know. 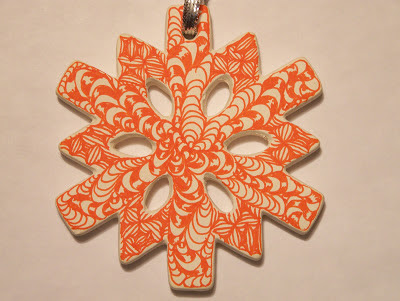 Use Bunzo and Socc to complete this snowflake. Socc was a little difficult because it is in a smaller space but it is there.

If you haven't yet, please take the time to go and view all the other submissions by others at the Diva's blog .
Thanks for visiting and hope you enjoyed it. As always, comments are always welcomed and appreciated.
Posted by Tangles and More at 10:51 PM 17 comments:

While I had some time decided I may as well go ahead and post this one as well. This one was actually developed before Exed.. Was experimenting with a grid and possibilities and this is what developed. Is versatile in that can be used to fill a single space, a line, or as fill in a space. It is a  little intensive so cannot be used as well in small spaces with out some modifications. Went through the same process in trying to come up with a name. Nothing really seemed to really grab me. Thought at one time about settia as the one section reminded me of the poinsettia plants but opted not to use that. Came up with the name because the first lines reminded me of feathers and then the rest is finished off with circles, thus Fearcles.

There are a lot of possible ways to fill. Have never used without some type of fill. If you decide to use would love to let me know as I am curious to see how others might use this, fill it and any variations. Here is the step out. 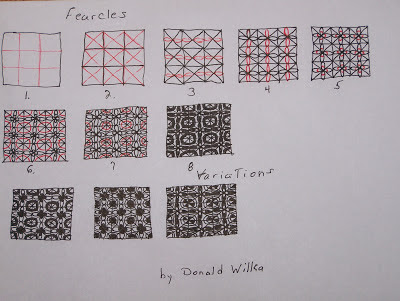 Here are some examples of when I have used it 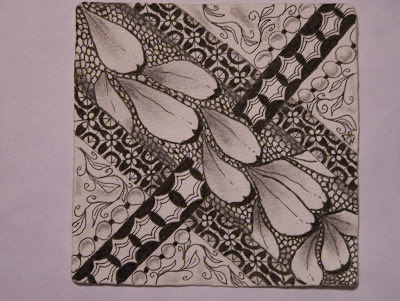 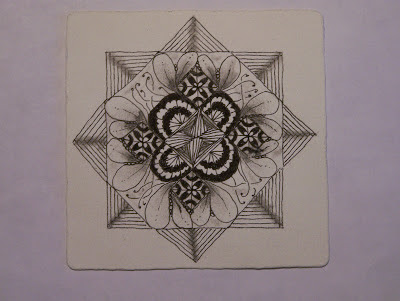 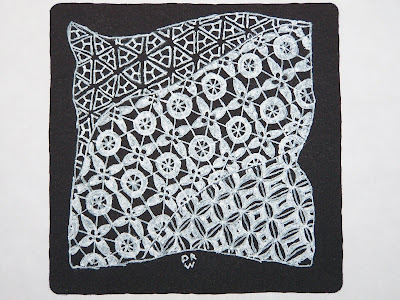 This one of the first attempts at using the black tiles. Did not attempt any shading. Still not comfortable with that part of it. Will have to do more of these to get the hang of using the white charcoal pencil.This though I think had too much fill to do much shading. 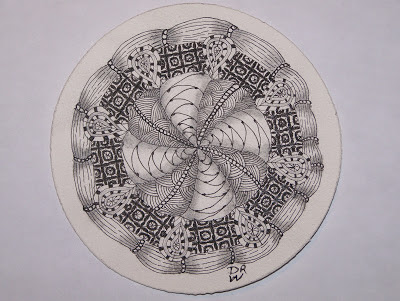 Here is an example of where I had to modify it because of space. I tried putting in the small circles in the center of the feathers with a white gel pen but did not like the way it looked so just put black over them.

Interested in any attempts to use and how it has worked for you. Have fun with it.
Posted by Tangles and More at 2:31 PM 3 comments:

Have been meaning to get this posted for some time but just have not had time. This came about by accident as I was just making random marks and the pattern began to take shape. Have used in a variety of ways and also have filled it in. At other times I have just left it with no fill, almost like a screen. Here is the step out. Would be interested in seeing how others use it or other variations that people come up with. 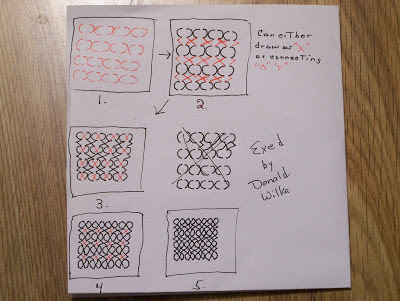 Found that when using this it does help to keep the arcs as consistent as possible. Below are a couple of possibilities for filling it in. I am partial to the last one. 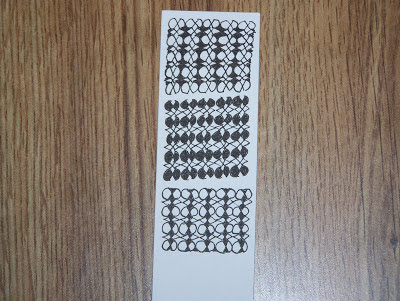 Here are some examples of where I used the tangle. 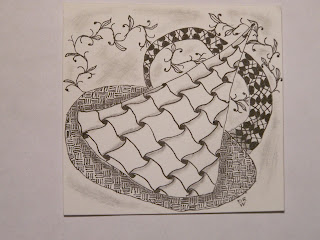 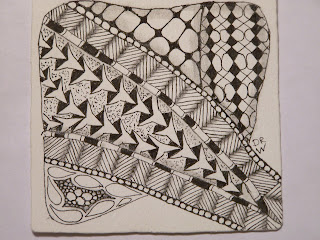 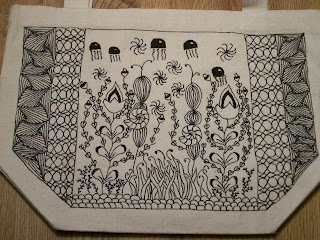 I am not good at thinking of names. Part of the reason that I did not post this for a while is that I did not have a name for it. Finally decided on Exed as after the arcs, it is finished by making exes. Not too original or catchy but it works. Hope you have fun using this.
Posted by Tangles and More at 2:01 PM 2 comments:

Did not think I was going to get this done this week. Started it on Tuesday and just finished up tonight. Has been hectic at work. Have been some other personal issues that have taken time and been taxing. Nothing directly happening to immediate family, but friends and extended family. Am glad that I was able to finish this and it is the weekend. Doing Bunzo was fun and finishing and shading it was fun also. Had a large part of it done before tonight but needed to do the fill and also shading. For as little thought as I gave it because I was under a time crunch to get it done and posted, I am pleased with the result. Hope that you like it. 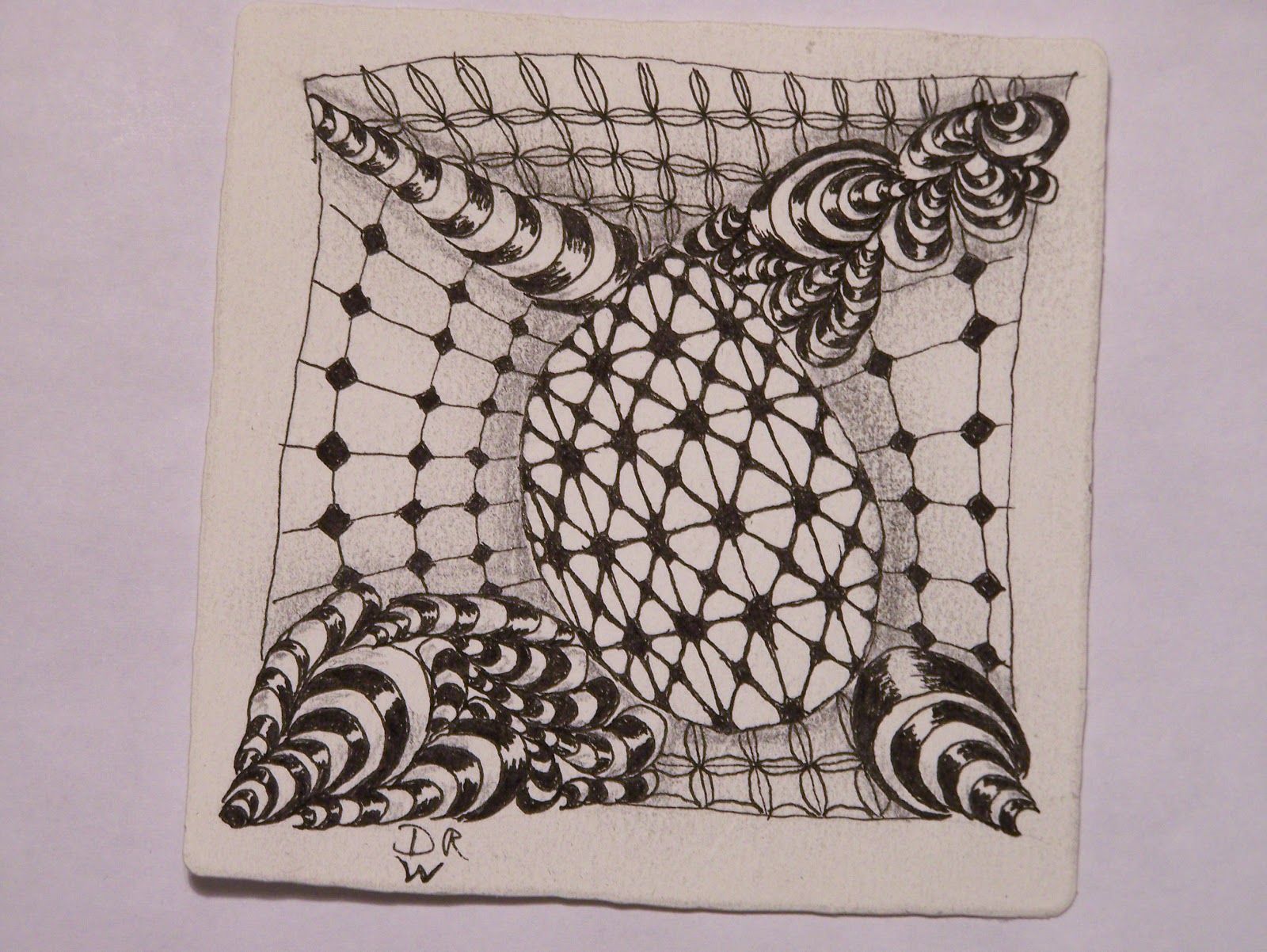 Part of the other reason that I it took me a while to complete this is that I am trying to get ready for a "Santa's Gift Shop" that the local Art Association is doing starting in the beginning of December. Been working on some things that will have on display and for sale. I k now this has nothing to do with the challenge but here is an example of one of the more recent things I completed. Still have a lot to do so may miss a couple of challenges. Will try to get them in. 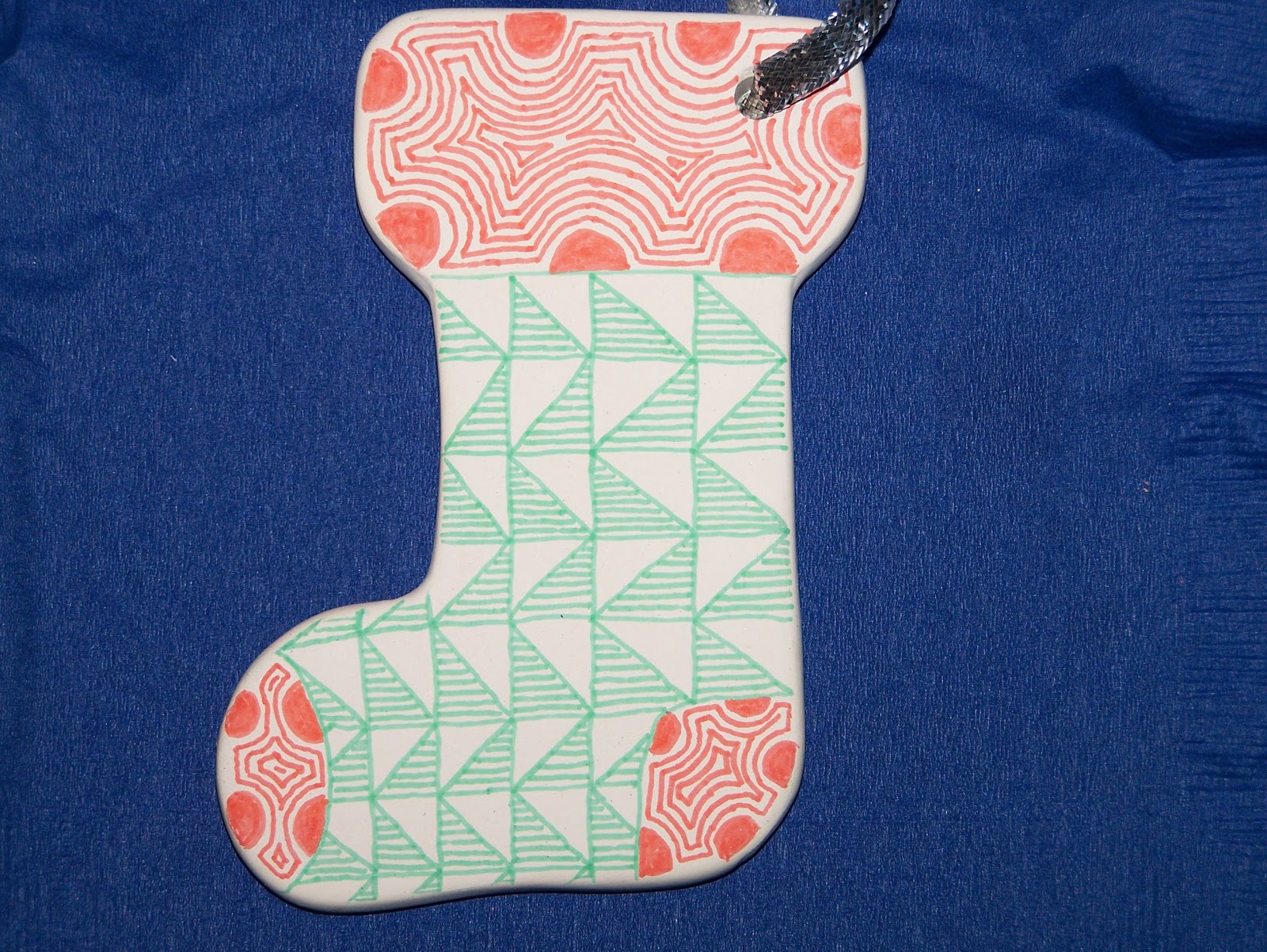 This a ceramic blank from Hobby Lobby. Used Sharpie Pen, fine point.  Held up to the roughness to the ceramic surface without much damage to the tip. Have not sealed it yet but planning on using a Modge Podge product. If interested have a few others posted on my blog and may add others as I get other new shapes and other things done. Have a lot of ideas but not sure how many I will be able to get done in time for the gift shop. One neat thing is that I talked with the person in charge today and she is open and excited about me doing some demonstrations of Zentangle® during the shop.
Posted by Tangles and More at 11:39 PM 12 comments: