Some New Years work and musing: Tangling for fun

I have been so busy doing things lately for the market that I participated in that have not done a whole lot for fun, When the new tangles were introduced at Zen Again, I played with them a bit but did not spend a lot of time with them. One that I liked looking at, but did not seem to get the hang of was Drawings. I think maybe I was trying too hard. Recently tried it again after seeing some of the work that Shelley Beauchamp did. It was better but still I did not fee like it was flowing that well. One of the reasons I wanted to work on it is that I am doing a class in January where I will be teaching the four new tangles. If I was not pleased with them, could not imagine trying to teach them to others.

I had told my granddaughters that after the market I would let them pick out a bookmark from the ones I had. I realized, I did not have that many and I did not have enough for all 6 of them to pick one. (The youngest who will be one I am not worrying about.) So I have been slowly trying to get a few more done. Although this is a project, I usually do enjoy doing bookmarks. A lot of times I will make them a mono-tangle, or do more free form. What better time to try Drawings again. I really did not have in mind to make a post of it but I was pleased with the result. Figured that maybe my struggles might encourage someone else to not give up when they were struggling.  Here is what I came up with. I hope you enjoy it. 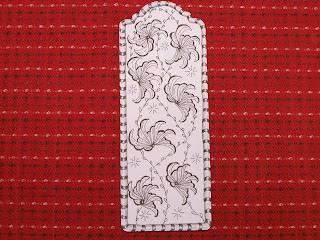 What really seemed to bring this together for me was that I went to the newsletter where the tangles were introduced and just looked at the examples, I did not look at the step outs. Mine now have more of an organic look. Did not thing that I could quite get the feather look yet. Will work on that in the New Year. But these really seemed to flow easily.

I appreciate all of those folks that have followed my blog and I really appreciate those of you who have made comments and asked questions. I know particularly in the later part of the year I was not posting much because most of my posts were for the Diva Challenges and I had not been doing them very often. I hope to be a little more consistent next year and I hope to add a little more about what I am doing and not just the challenges. I have a couple of projects lined up. There is a  possibility that some of the posts will not be about tangling but one of the other areas that I enjoy.

Thanks for visiting, I hope the New Year brings many blessings to you and the people around you. As always, comments are welcomed, encouraged, and appreciated.

Nothing like working up to the last minute on things. I was going to finish this last night and got side tracked helping someone else finish some things. I thought they were going to help with them but it did not work out that way. Oh well, it all got done. This was the last thing I  needed for a present for a family member and finished it about 4:30 PM on December 24. Did  not have time to think about much and just went ahead on did it.

I used Shelly Beauchamp's tangleations of Drawing as my inspiration. If you have not seen them, click on this link,  to view her fantastic art work.  I saw the ensemble that she did and really liked it. Mine to do not have quite the flow of hers but I was pleased with the end result.  Here is what I came up with. I hope you enjoy it. 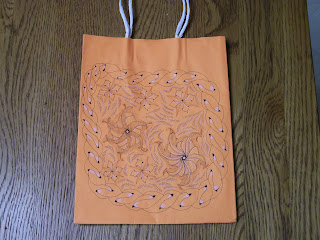 Not sure what happened with this picture but the bag is really a bright orange. It is not a brown.

Tangles used: Drawings, Stella, Nooms, & Indy-rella. Used a white PrismaColor pencil for the highlighting. If I would have had time, I should have taken a picture of what it looked like before I added the highlights. They made a significant difference.

Want to wish you all a Merry Christmas, and if you celebrate another holiday, Happy Holidays. I want to thank those of you who do follow and read my blog. The fact that people actually would find what I post and write about interesting is very humbling. I know I have not done as much here at the end of the year, but am hoping to be more consistent next year.

Again, Thanks for visiting. As always, comments are welcomed, encouraged, and greatly appreciated.

Here is something that I have been working on for the Winter Market that I am participating in. These are a couple of chalkboard style balls. I used Uchida Chalk Markers to do these. Working in the round is always a challenge but am pleased with the way that these turned out. Have one more ball and a couple of the rectangular ornaments to do. Hopefully I will get them done next week. If not there is always next year. I did not do any new ceramic ones this year. Figured that I had  enough. Here is what I came up with. I hope you enjoy them. 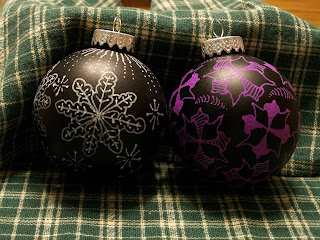 The white is a Sampson-based snow flake with Msst and Ahh.  The purple is Stella with a little
Indy-rella.

One thing about these chalk markers is that if you do not like what you have done you can wipe it off with a wet cloth and start over. I did use a Krylon matte  spray finish to seal it so it would not rub off or smear later.

Posted by Tangles and More at 9:17 PM No comments:

It has been a long time since I have been able to participate in a Diva Challenge. I miss them but just have not had the time. I had a little time and needed a break from what I call "production mode" as I have been focusing on things for the Winter Market that I have been participating in. This is a 7 week commitment for about 6 hours every Saturday. We are a little over half way done. Oh well I digress.

This weeks challenge is a Part 2. I did not participate in week 1. I had done a class on this before they were using the term fragments. It is fun to experiment and see what you can up with. I spent a little time working in my journal, experimenting with different fragments. I do not spent enough time doing this. Here is a picture from my journal as I was experimenting. 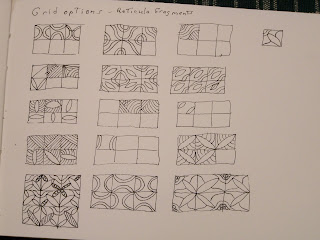 Last weeks challenge was to use a fragment. This week was to use an asymmetrical fragment and rotate it. It was the asymmetrical part that gave me the most difficulty. It seemed like most of the things I came up with were symmetrical. That is not really a problem, except it did not meet the criteria for the challenge. There are a couple that I will experiment with in the future but there are some that will probably just be put to rest. The single fragment in the upper right hand corner is the fragment I used for my tile. What I did in the top row is to mirror image it. In the next row, I inverted it and then mirror imaged it again. the result is the pattern you will see in the tile.

Well I hope you did not give up and are still reading this. Here is the tile that I came up with. I hope you enjoy it. 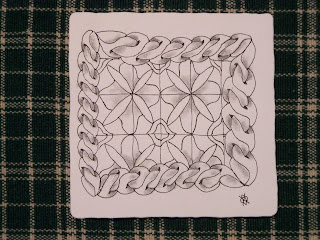 Besides the fragment, I was experimenting with a new tangle Noom. Have to work on keeping it consistent, which is not as easy as it would seem. The variance does not bother me a lot.

I have not looked at any of the things submitted on I am the Diva. Will try to look at as many as I can. If you have not been there, would encourage you to do so as there are usually some really great pieces of art. You can click on the link above to go there.