What's in a pattern? Can they be claimed?

Recently, as well a couple of times in the past, there have been discussions in some of the FB tangling groups about patterns. Some of this has focused on what is a new pattern and what is a variation of an existing pattern. There have also been discussions about naming and claiming a pattern. My own belief is that there are probably not any new patterns, or in Zentangle® vernacular tangles, just variations. Patterns get used in the textile industry, in architecture, knitting, crocheting, quilting, art and nature. I think what has happened with tangling is that it is the newest to use patterns and over the last 10+ years, the number of tangles being used has exploded.

Are any of these new or are they just new to tangling? My belief is that the later is probably true. Think about how most patterns/ tangles come into being, even the ones that Rick and Maria included in their original publication and sometime get referred to as "Official tangle". They come from observations of other things. What the Zentangle® method provides is a way to deconstruct them. Even this is not a clear though as I have seen things posted where the end result is similar but the steps to get there are different. Maybe that is why people will talk about a step out being copyrighted and not reproducing them.

Well, this post is getting off the track. What made me think of it is a very common pattern. Here are examples of this tangle in the tangling world. 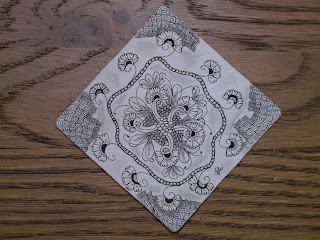 The tangle I am referencing is the one in the corners. In the tangling world it is known as Keeko. 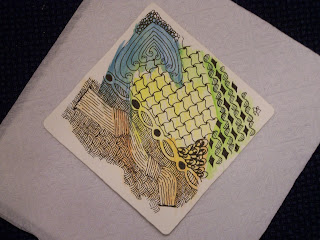 On the left is another example of this tangle as an edge. 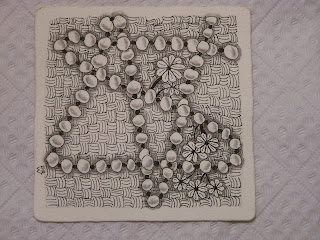 Here is an example of the same tangle used as a background.

This same pattern is used in other things as well. Some that are familiar with my blog know that I also knit and crochet. Here is an example of it being used in this craft. 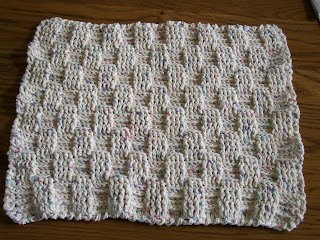 In this "world" it is called basket weave.

I think that anyone that has ever used Keeko recognizes it as a weave pattern. They are made differently but the pattern is the same. Can anyone lay claim to it? To me, the purpose of having some common names in a particular craft is that it aids communication.  Someone can use it and people know what is being talked about. So I do feel there is a purpose in naming them.  However, I do not feel that there will ever be consistency, even in the tangling world as long as there is no single data base, or official data base if you prefer to list them. I do not think this will happen, So I guess we just have to get used to there being duplication and just try not to get so "bent" about it.

Thanks for visiting. If you got all the way through this, I applaud your perseverance. As always, comments are welcome, encouraged, and appreciated.