One of the newer trends has been the creation of the Zen-gems. It has now progress to the point where there are some folks who are trying to duplicate actual gem stones. Being a "little late to the party", I just recently began trying to make them. My primary motivation was to have a new activity for classes. I did some before the class and some during the class to show people the process. I was not totally pleased with either of those attempts. I finally had a chance to try again. I actually completed the color part a couple of weeks ago but never got around to finishing the setting. Seemed there was always something else that seemed to be a higher priority. I finally was able to get to them. Here is what I came up  with. I hope you enjoy them. 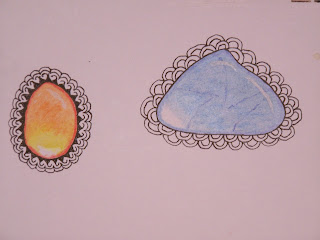 The yellow/orange one was done with Faber-Castell water color pencils. The blue was done with Loew-Cornell colored pencils. The latter are not an expensive pen. With the water color pencils, I did add some more color after I had used water to initially blend the colors. I made sure that they were dry before adding more water color. Used a small heat tool to do this.
With the Loew-Cornell pencils used the white to blend and smooth the colors. It did leave a little bit of texture but I think that added to the overall effect.

Here are some of the places I looked to get ideas of how to do them. Not sure that I used any of them exclusiively but they were all helpful.

These first 2 are by Kae Yoishno. She was one of the first to  post pictures and explain how she had done them.

Here is one by Chris Titus. She illustrates her process.

The last one I am going to list is by Anki Helgor
This last one is the longest of the 3 but it is informative.

Couple of things that I learned in doing these. You do need to slow down., At least I do. If I rush, I do not   like the result. I did learn some nice techniques in blending colored pencils. I have used PrismaColor pencils   and have used the blending pencil for those. The blender did not work with these pencils. Using a lighter        color to blend is discussed and illustrated in the last video listed.