This weeks challenge was to use the new tangle IX. Had wanted to post something sooner but two things interfered. One was that most of the week I was at the CZT training. The other is that even though this appears to be a simple tangle, I did struggle with it. This is actually my second attempt. The first I got lost in the auras.  Also difficult to keep the lines straight and the spaces consistent. Not sure I accomplished either one, but still as with many tangles the outcome can still be okay. And as the Diva mentioned, it is about the process. 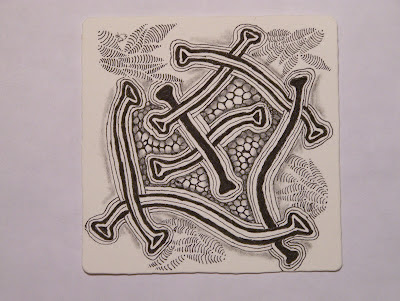 The other 2 tangles that I used were Indy-rella and Tipple.
Posted by Tangles and More at 1:14 AM