Beyond the Basics Class: Working on Fabric - Canvas totes

Held a Beyond the Basics class yesterday. There were 3 in the class. Some had been tangling for over a year and one has only been tangling for a few months. This however, was the first that any of them had worked on fabric. I had done a couple of canvas bags about a year ago. Had thought about doing a class on it but just never got around to it until how. These were 5" x 6" canvas totes that I got from Hobby Lobby. It is a rougher surface and we used Pentel Fabric pens. Wanted to keep it simple for them as they had not used either these pens or fabric before. We started out the class by talking about some of the differences in using the fabic pens and to keep it simple suggested that they use patterns that did not have a lot of fill. We spent about an hour reviewing different tangles that could be used and I demonstrated them if they were not sure about it. The last hour was spent working on the totes. They all did a super job.

I have not taken pictures of class a lot before as I never remembered to take my camera. I recently acquired an Ipad so I used that to take a picture of their results. Here is what they did. 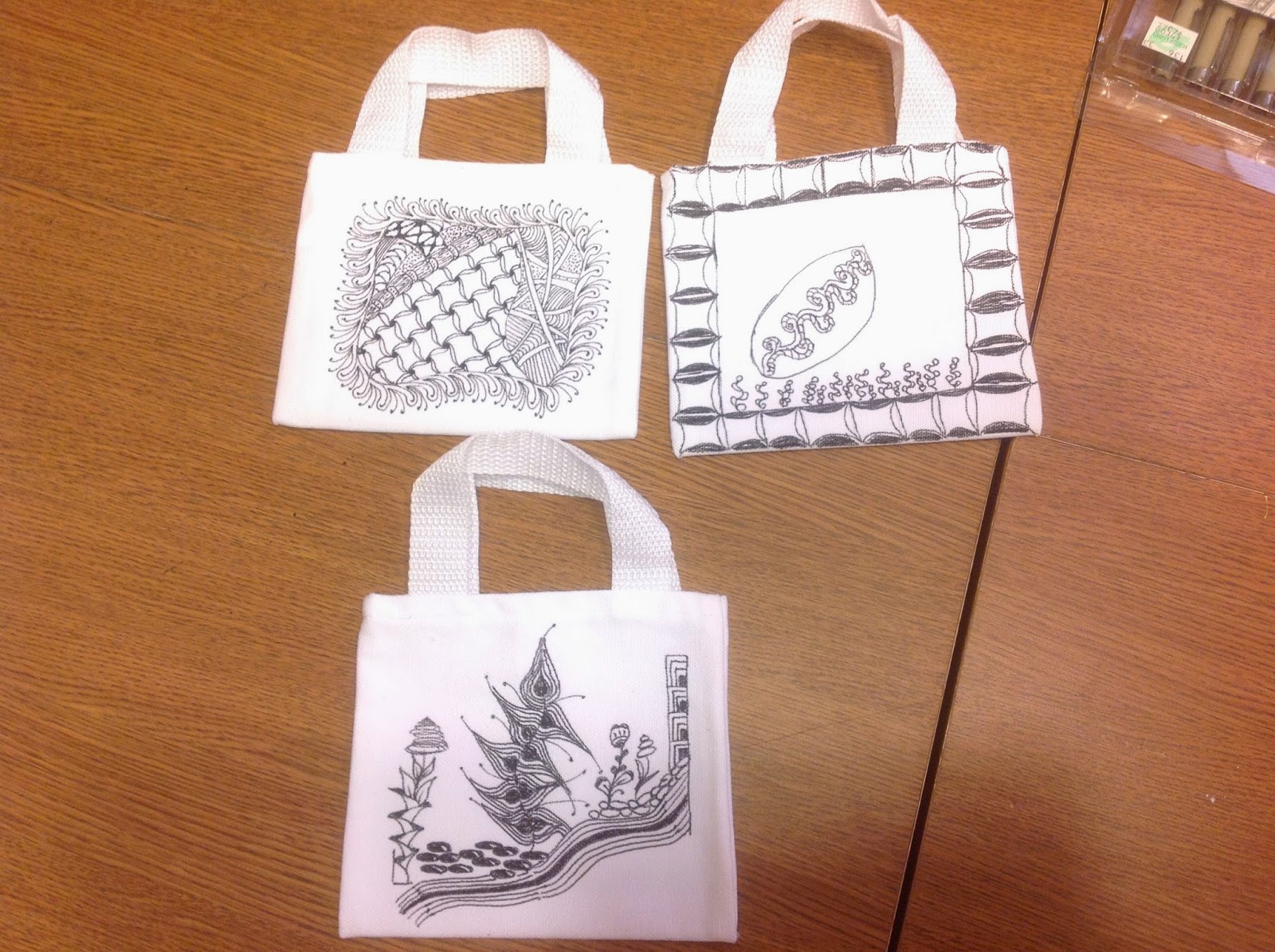 It was a fun class for me as I did not feel pressed for time and there was more opportunity to achieve that silence as people were working on things. I love the variety that they came up with as we did not use a string and I left it up to them as to what tangles they wanted to use. One neat experience was that one lady very early announced that she had made a mistake. Suggested to her that she just sit back for a few seconds and think about the possibilities that she could pursue. I reminded her of the " there are no mistakes in Zentangle®, only unplanned opportunities" tag phrase. She chuckled, but very quickly reminded herself that she just needed to go with what she could. As she continued to work it was neat to hear her become excited about her results. What she had originally seen as a negative, she turned into a positive.

I started working on one but only got a little done as I was helping them. I was also experimenting with some different fabric pens. I had purchased a set of Uchida Fabric ball & brush markers a while back and never got around to trying them out. This gave me the opportunity to do so. I finished mine today. I was using color. I did not want to throw that into the mix for them, although I think  most of them would have been able to handle it. Here is what I completed today. 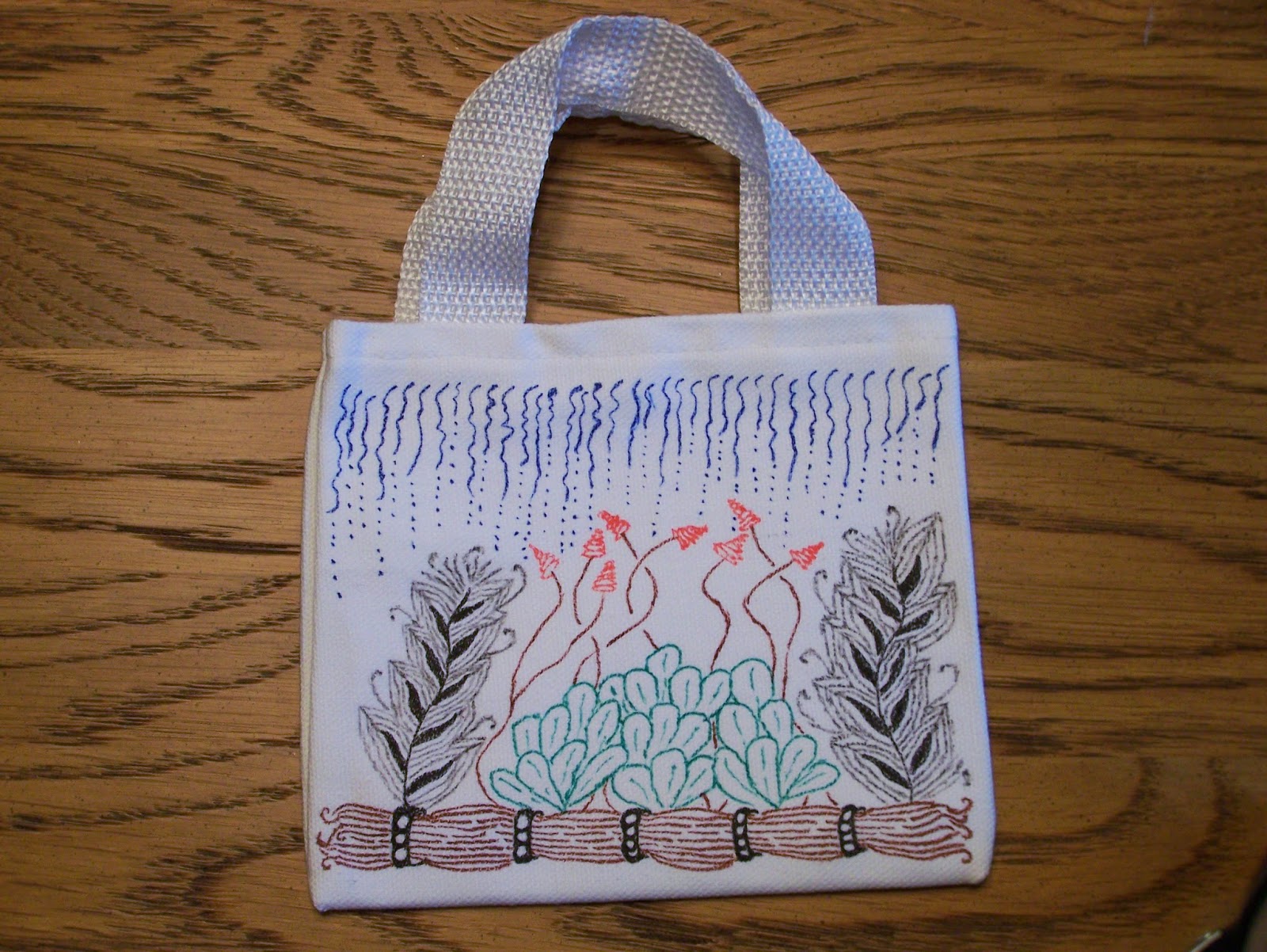 I used both ends of the pens. For some reason the black ball point did not work as well as the other colors. Not sure why. Before I tried the other colors, I thought maybe it was the roughness of the canvas. It was not a problem with the other colors.  The upside of this is that it gave the Featherfall a somewhat gray look. With all of them, the brush did provide a better cover more easily. It was also pretty easy to get a reasonably thin line.  The only color that I did not use was the yellow. I wanted to try these because the Pentel Fabric pens are only in black. I do not use color a lot, but wanted to have another option when I wanted to. Next I will probably  try to do something on a fabric which has a higher thread count and see how they work. Neither the Pentel pens or the Uchida markers bled through the material.

If I am doing a black/white ZIA I will probably use the Pentel pens. I like the darkness of it and it does go on smoothly. The only draw back is that they do not last long so if you are doing a larger bag, will probably need more than one pen.