A respite from tangling: Crocheted "Messy Bun" Hat and Cowl

If you are use to seeing posts on the Zentangle® method or one of the tangling challenges that I have participated in, sorry to disappoint you. Over the last 4-5 years I have spent most of my time tangling, This has been either preparing for or offering classes as well as creating different things for the different market events that I participated in. Many of those were also a marketing tool for the classes. During that time I have done little with any of the needle craft that I have done before. The last couple of weeks I have cut back on the tangling and been working on a number of crocheting projects. I have enjoyed the break. Don't see that this will be a major thing but just taking a break and doing something else that I enjoy has been a nice respite.

I earlier posted pictures of a couple of pairs of fingerless mittens that I had done. Here are two other projects that I have been working on. 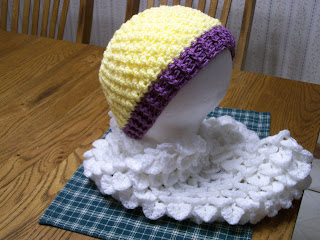 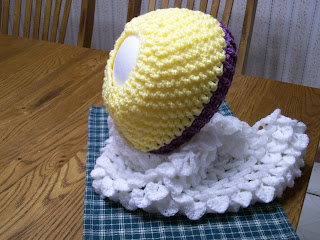 The hat is called a Messy bun or ponytail hat and the then there is the cowl.  The cowl uses the crocodile stitch that I used on the mittens. The hat is done with what I think is called a Jelly Bean stitch. The pattern that I used is one that I found  on Ravelry. It is called a Jellybun Beanie by Heidi Yates. I think her site is snappy-tot.com . Both of the items use basic stitches and are easy to do.  There were a few things in the hats directions that were a little unclear but I was able to figure them out. The cowl is a pattern from Leisure arts.

Thanks for visiting.  Stay tuned as I will still be posting things on tangling. As always, comments are welcomed, encouraged, and appreciated.

Posted by Tangles and More at 9:06 PM