Beyond the Basics class and a gift package

I am getting ready for a Beyond the Basics class tonight. Decided to use an idea that was adapted by Debbie Huntington to make Valentine Cards. She adapted it from a Video done by Zentangle® HQ during the 12 Days of Christmas videos that they do.  Here is what I did for mine. 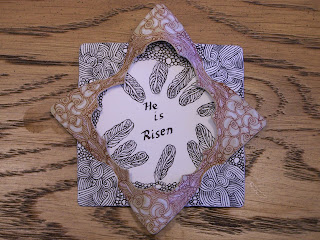 Did this as part of a challenge using 4 tangles. It was a on a FB group that I am a participant. Can use to make your own card with a personal message or use as a frame for a picture.  This used the standard tiles.  Could use the a black tile instead of he Renaissance tile.  I kind of like this combination.  Tangles used are Tipple, Sand Swirl, O-curly, and Plume_ar.  Highlighting was done with a white charcoal pencil and a graphite pencil.  The letters were done with a stub nib fountain pen.

The other thing I mentioned is that I received a package from my sister, who is also a CZT.  She was planning on getting rid of some things and asked me if I wanted some things.  I was not really sure all what she was going to send so it was fun opening the package and seeing what was there. There were a couple of things that I do not remember her talking about.  Here are some pictures of the things I received. 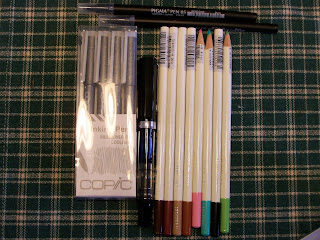 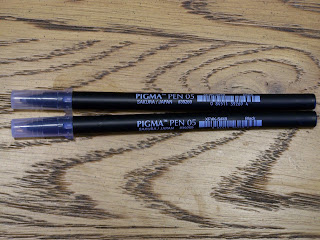 I got some gray Copic markers and Tombow pencils On the top are 2 Sakura Pigma pens. I took a separate picture of them as they did not seem to be on the group picture. The one thing that did not show up and is between the Copic cool gray markers and pencils.  It is a fine line fountain pen.  I have always liked using fountain pens but have not used them for a while. She has presented me with a couple and I enjoy using them.  Sometimes it is a little tricky, depending on the paper as sometimes it will bleed. I have put a nice blue ink in this one and am looking forward to using it.  Not sure if I will use it to tangle or not.

This was one of the unexpected items.  I have not found out from her where she got it.  It is a pencil case that is made of a reinforced craft paper. It has a sipper.  If could find some it looks like it would be neat class project as could tangle on the paper.  Will explore this a little more fully. 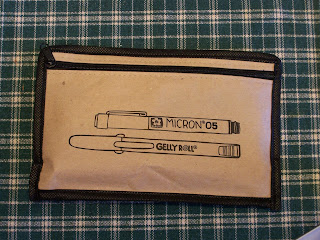