Was not sure that I was going to get anything to post.  This week's challenge was a "Use my Tangle" and featured the tangle Pickpocket.  This tile had a couple of those "unplanned opportunities".  I almost decided just to give up, but opted not to.  Try to encourage my students to use what is there and make it their own.  So that is what I did.  The first "opportunity came up right away. I had seen the tangle before and did not look at the video and the stepout was a little hard to see.  What I did not take into account is that the orientation of the triangles was important to the tangle. If I do the tangle again I would change a few things. One I would start out making triangles rather than dots and trying to turn the dots into triangles.  I also did not notice that the tangle comes together by starting on the top of one dot and going to the bottom the next one.  I could also choose not to try to turn them into triangles and keep the circles which would make it less angular.  Either way, I think the key is going from top to bottom.  I did the small section and was not sure what to do.  After letting it set for a while decided to add a few of the tangles that I enjoy doing.  Is this my favorite tile? Probably not, but it is still unique and there are things that I like about it.  The second "opportunity" occurred when I started doing Featherfall.  I was rushing and just saw the 01 on the Micron.  As I was doing it, it not very good light, I thought that the ink looked different.  It almost looked like it might if the pigment separated and it was more of a blue.  Well after I decided to turn on a little more light and look at the pen, I found out I had grabbed a purple Micron rather than the black.  What to do?  At first I was just going to start using the black where I realized I had been using the purple.  I decided to go ahead and finish the Featherfall with the purple and then use black for the other tangle with which I combined it. That part was planned. Oh well, have to remind myself that I have to use the same principles that I try to instill in my students.  Here is what I came up with, I hope you enjoy it. 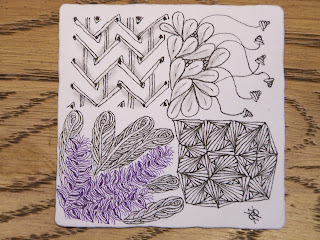 Tangles used: Pickpocket, Flux, Zinger, Featherfall, Plume_ar, and Paradox
Shading done with HB pencil. As you can probably tell, I did not use a string in this tile,  It is separated into quadrants however.

I have not had a chance to look at other things that people have done.  I have seen a few that have been posted elsewhere or have shown up in my "read" file.  Hope to look at some but have lots of other things to do.  If you have not come here from I am the Diva, would suggest that you to there and look at all the great art that has been submitted.  Just click on the link above. If you usually do not participate, give it a try, whether you post it or not.

Thanks for visiting.  As always, comments are welcomed, encouraged, and appreciated..
Go Tangle !!
Posted by Tangles and More at 4:31 PM