I had mixed reactions to this challenge. I read the challenge a couple of times and am still not sure if I understand exactly what is to be attempted. Is it just to not use all ready established patterns? Which could mean if  you created another pattern you would have created a new tangle. Or is the task to just draw and see if patterns emerge. Looking at the submissions of others was not totally helpful, although it did reveal some very nice images. People had varied interpretations. What I chose to do was focus on just using the five basic strokes in Zentangle®. I ended up doing two tiles as I really did not like the first. In the first, I started by doing the border and string. In each section I did one or more of the basic strokes randomly throughout each section. When I got done, was no discernible pattern. I began to fill in parts but still there was not really any discernible pattern. Is it  Zentangle? Look and see what you think and will share my thoughts below.

The only thing that I would say that makes this a Zentangle is that I used the basic method to start. I did not get away from thinking about what to do other than when I was randomly doing the strokes. After I was done I began looking at it to decide what I was going to do with it. Did some fill and some shading. This really felt like what I would refer to as doodling. There was no pattern or sense to it, it was random line 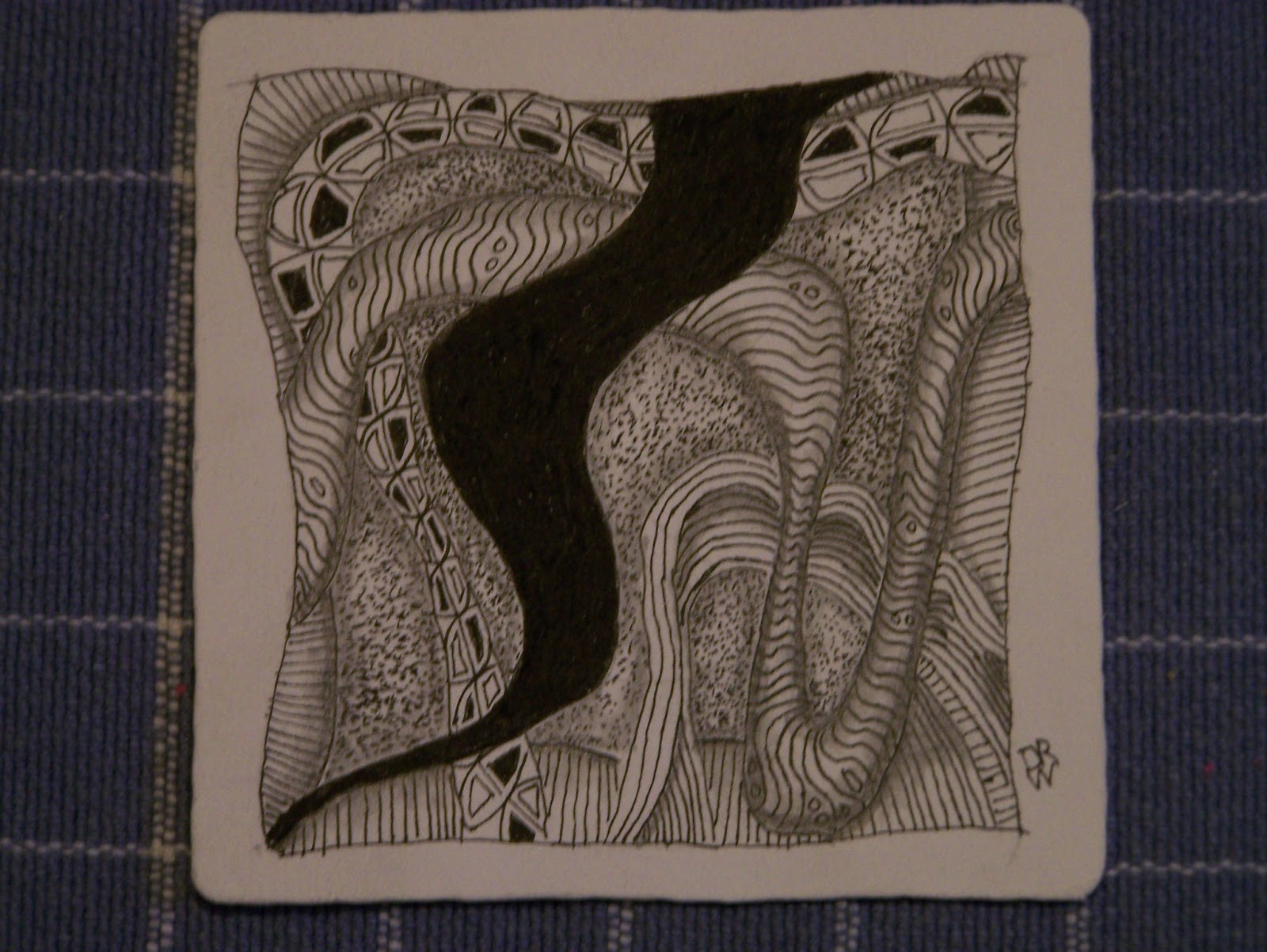 I did the same thing with this one by starting with the basic method but then totally ignored the string. I again tried to use the basic strokes. Started with the larger "S" shapes. I then tried to do things inside and was a little more conscious of trying to create something that was somewhat of a pattern, but not an established one. This was work. What resulted are the patterns in the 3 larger S lines. I finished it off with straight lines around the outside and dots in the spaces. The last thing was the shading. I liked the way that this one looked but does that make it a zentangle.

I guess to answer the question, "Is it a Zentangle?" for me is no. The second one is maybe a little closer as it did have some patterns. I guess I would go back to what I know of the definition of Zentangle. It uses structured patterns to create images. I think the Zen part is that one can get lost in the process as there is some repetitiveness to the patterns. It also is that you do not necessarily decide ahead of time what tangles you are going to put together. You can do it completely randomly. Since a lot of people participate in the challenges, which is not a negative thing, but it does set some parameters as to what is to be done. It does not, at least to me, mean that you approach the task with no thought.

That is at least my take on it. That does not mean that you cannot create some great images using some patterns, but do not think that they can be defined as Zentangles. I would say at best they are ZIAs.

Would recommend that you visit I am the Diva and see the images that others have created and to get their views and their answer to the question, Is it a zentangle.