I did not intend to post a lot of these but some unique things happened as I was doing them. Here is the first one that I did. It is on brown craft paper and is about 5" x 8" I used Prismacolor pencils using a single color with white to create a tone. It generally lightens the color. 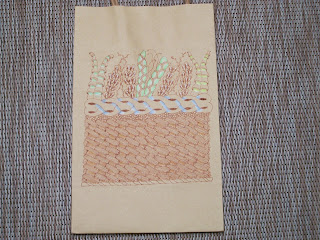 I purchased a number of other bags as well. These are larger and measure about 8"x 9". Here is one that has a silver frosted finish. I again used Prismacolor pencils with white for the tone and tried to do some with just the white. That did not show up as well in the pictures and it is not as strong in reality unless the light strikes it just right. I kind of reminded me of working with the frosted glass ornaments that I did a couple of years ago. as I usually do, I used a blending pencil on the Prismacolor pencils to smooth out the color.  Here is what the frosted one looked like. 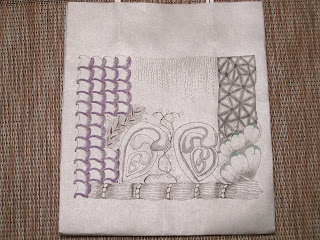 I used a purple and a green Prismacolor pencil. For the black shading, I used a regular graphite pencil but also used the blender on this as well. I layered it to get the different intensities.

Here is the last one. This is the one that was the most surprising. The bag is the larger size and it is just a plain white paper. It is almost like working on a tile as far as the color goes. The paper is not the same quality. I say that as I approached it with the idea of using both black and brown microns. It developed in true Zentangle® style. I had no idea of what I wanted to do. I did not want to use a string so I started with a single circle. I did the one in the upper right first. I then did the one with Gneiss and the one with Drupe was last. I liked the combination of the black and brown. Then there became the issue of how to finish off the background. Probably got carried away with Opsess on the bottom but Florz was an easy choice. I did not want to do too much embellishment with it. I again used Prismacolor pencils for the highlighting and fill in Opsess. I am really pleased with the way that these turned out.

For those of you familiar with different tangles, I did not really make that many mistakes on the bag. A couple of the Bronx Cheers were to cover up some errant pen marks. Most of them were additions to provide a little balance after having so few on the cover. 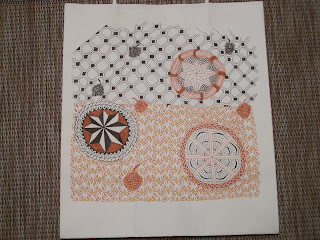