Another lesson learned which will be helpful when I teach Zentangle® to either individuals or groups. Do not evaluate until you are done. It is good to put it at arms length to see what is occurring but the finished zentangle may surprise you. When I saw this template was excited because I saw a lot of possibilities. Started working on the "ring" with the teardrops/guitar picks. Before that I had put a tangle in only one of the sections in the other areas e.g.  zander, betweed, shattuck. This was probably not a good idea and also probably not in line with the Zentangle method. I choose to do that ring because it was the most intense. As I proceeded around the ring and there was so much dark, my excitement began to wane.  As I finished this and then proceeded to zander, I was pleased with the way this tangle looked but still so-so about the whole Zendala. I finished the center last. As I finished each section. my excitement began to return. I think the order had nothing to do with it, it was assessing before I had the whole picture.  The shading just added to my feelings. Shading is almost always the most difficult part for me. I had ideas about what I wanted to do before I even started and was pleased with the end result after I used the blending stump. Hope you like it. 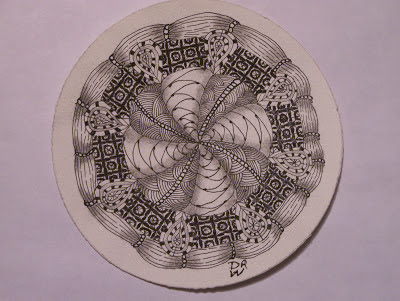 As an aside, the teardrop/guitar pick section is not a named tangle as far as I know. My use of it resulted from taking pictures of patterns that I saw. While in the mall in Providence, there was a kiosk that had wind spinners. They were in this shape and this is what I deconstructed to represent that. It is a nice fill for this type of section but not sure about its usefulness to fill a different space. May have to experiment with it and see, but it worked well here.
Posted by Tangles and More at 12:09 AM